In my previous post, I mentioned I have 3 friends in the state.  I met Fiona in highschool, and now she is attending dentistry school in Detroit.  We walked from her place just across the street to Eastern Market.

Eastern Market is in downtown Detroit, where people tell me I should not go.  The locals I have talked to say that I could get robbed, or my car will get broken into.  Through living in a big city, travelling through 3rd world countries, and poorly picking my social groups, I have developed a pretty high tolerance for sketchiness.  Downtown is pretty nice!

Eastern Market was only a walk away (walkable area!!!).  It’s basically a huge farmers’ market, surrounded by small independent stores.  It’s the Detroit equivalent of the St. Lawrence market.

We randomly walked into a store which sold surplus work supplies:  chef’s uniforms, scrubs, pots/pans, etc….  She said she had lived in Detroit for 30 years and never had any problems.  I am absolutely sure she is street smart, but perhaps people’s perception of downtown is different than reality?  While trying to figure that out, I found this crime map of Detroit.  Apparently, there is crime everywhere, not just downtown.

I felt a connection with this place.  I’m used to the bustling downtown life, with walkable areas and an array of shops at my fingertips.  Maybe I’ll move here? 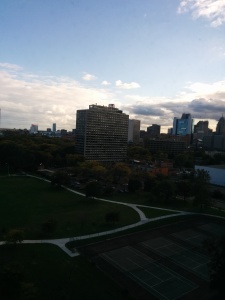