After two years battling dysphagia, regurgitation, and spitting up foamy messes, I’ve  finally gone and met a surgeon.  I was reccomennded to Dr. Carmine Simone by my  GI specialist, Dr. Sam Friedlander.  It took about 3 weeks to get an appointment with Dr. Simone.

Dr. Simone went over the procedure, and basically told me what I already knew.  From my tests I had zero peristalsis and a LES pressure slightly above the mean. He recommend that I get a laparoscopic Heller myotomy, but without a fundoplication due to my complete lack of peristalsis.

I’ve booked the surgery for January, as to not interfere too much with the school term.  Apparently the doctors do not perform surgery during exam/christmas time, which basically makes them unavailable for most of December.

I also asked Dr. Simone what he though about POEM as a surgical technique.  He said that there were POEM trials held by Dr. Marylin at another hospital in Toronto, and that he would not recommend it.  He also said that his opinion was biased, gave me Dr. Marylin’s contact information, and suggested I should contact him myself.

I will be continuing reciving treatment from Dr. Chen at AC99 until the surgery.  I’ve had noticeable improvements since I’ve started acupuncture.  Next week I will be starting a combination of acupuncture and herbal extracts.  Dr. Chen seems to think he can restore peristalsis, so I will continue with his treatments.

I also requested a second manometry test to see if the acupuncture has had any unbiased measurable effect.  However I believe I was put on the low priority waiting list for this test because I had it done once before.

Most of the effective western treatments are surgeries.   I will list these from least permanent (medicines) to most permanent (surgeries).

Calcium Channel Blockers (Nitrates) are orally injested drugs such as Nifedipine or Isosorbide Dinitrate.  They are taken 15-30 mins before every meal and work by temporarily relax smooth muscle and reduce LES pressure.  These drugs have been studied intensely and are effective at lowering the LES pressure (average of 45 mmHg to 15mmHg), but is ineffective at reducing chest pain, and has side effects such as lower blood pressure and cause headaches [Gelfond, 1981] .  Nitrates are not seen as a long term solution, and generally only prescribed to patients with early stage Achalasia [Annese, 2006], [Pohl, 2007].

Botulinum Toxin A (Botox) Injections involves endoscopically injecting botox directly into your LES.  Botox causes muscles to tighten, and in this case will keep the sphincter open.  Success rates are 44-100% 6-12 months after treatment.   Success rates are generally better in patients over 50 or for people who cannot risk surgery.  Patients tend to develop a resistance to the treatment and eventually it will no longer have any effect.

The procedure sedating the patient, then injecting 100mL of Botox into four quadrants about 1cm above the esophageal spincheter.  Patients can return after sedation wears off.  Symptomatic improvement is gradual and usually peaks in 1-3 days.  [Source]

Botox injections can be effective if the patient is aged, with a high LES pressure [Source].

Pneumatic Balloon Dialation(s) (PBD) involve endoscopically inserting a balloon into your LES, then inflating it to a certain diameter thus stretching and tearing the sphincter muscle.  Scar tissue will grow back in its place, which does not hold tension as well as muscle.  PBD generally has a 65-85% success rate on a follow up after 6.5 years.  This technique brings temporary relief to symptoms of Achalasia, as remission rates are 59% in the first year, and 40% in 5 years, and 36%% remission in 10 years.  Symptoms typically recur in up to 50% of patients, with a of dysphagia-free symptoms of 5 years. 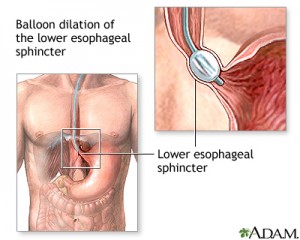 PBD is generally more effective in older patients (ages >40), as there is a difference in muscle tone around the esophageal sphincter when compared to younger patients.

Pre-procedure invovles fasting from 12 hours to 2 days, depending on the severity of symptoms.  The patient will be sedated, and a 15mm long balloon mounted will be inserted orally on an endoscope into your LES.  The balloon is initially inflated to 7-15 psi, and held at pressure for 60 seconds.  During this time, there will be discomfort.  After the initial inflation, a second inflation at a lower pressure is performed. After the procedure, patients are kept for up to 6 hours to check for perforations.  [Source]

If symptoms return after a few weeks, another dilation with a larger balloon is performed.  The treatment typically has 3 sizes of balloons (30, 35, 40mm in diamter), and you will start with the smallest size [Source].  The smallest size balloon may not stretch your LES out sufficiently, and therefore the treatment may need to be repeated multiple times with a larger balloon.   Although less popular, multiple dilations can be performed in a single treatment, until a target manometry value is achieved.  [Source]

There is a 1-2% chance that perforations may occur during this technique.  Perforations are tears in the esophagus and can are dangerous as blood can pile up in esophagus.  This will need to be repaired immediately, usually by endoscopic surgery.

Laroscopic Heller Myotomy (LHM) is a safe (no recorded deaths) minimally invasive and procedure (surgery) and considered to be the definitive treatment for Achalasia.

An incision is made above the belly button and hollow tube (trocar) is inserted to fill the abdomen with carbon dioxide gas to allow for visualization of the abdominal organs.  A camera (esophagoscope) is placed in this tube to allow the surgeon to see during operation.  Four more incisions are made in the abdomen and tools are laroscopically used to cut the circular muscle that squeezes the LES.  The cut is 1.5cm deep on 6cm of muscle on the esophagus and 2cm on muscle on the stomach are cut.  Bleeding from the muscle incisions is minimal so there is no attempt to cauterize.  [Source]  [Ramacciato, 2005]

Cutting this muscle will cause the LES to be stuck permanently open.    Now nothing is preventing reflux, so another technique called partial fundoplication can be used to limit reflux.  Partial fundoplicaiton involves wrapping a portion of the stomach around the esophagus.  Two or three stitches are made to hold the stomach in place.  The stomach will be wrapped 180 to 270 degreees around the esophagus. [Ramacciato, 2005]

Standard Heller Myotomies cut 2cm on the stomach, but it has been shown that Extended Myotomies which cut >3cm are more effective at (17% for standard, 9% for extended) reducing reccuring dysphagia.  [Wright, 2007]

Average operation time is 150 minutes.  Success rates are 75-90%, with failure being defined as requiring another operation.  The best candidates have had no other treatments (dilations or Botox) [Source].  These treatments can lead to strictures at the esophageal junction, which need more work to be cut, and thus have a higher rate of perforations.  People who fail this operation can undergo another operation with a good success rate.  [Source] [Marco et al, 2001]

Most patients are discharged on day 2 or 3, after which a clear liquid diet (ie:  apple juice) can be tolerated.  Days 4-6 a ‘full’ liquid diet can be tolerated (ie:  meal replacement shakes).  A week post-op to a month,  a soft diet can be started.   After a month solid foods can be resumed.  Proton pump inhibitors always given to postoperatives. [Discharge Instructions:  Heller Myotomy]

Peroral endoscopic myotomy (POEM) is the newest surgery treatment made available with the invention of NOTES (Natural Orifice Translumenal Endoscopic Surgery).  This procedure has been shown to significantly reduce dysphagia symptoms and reduce LES pressure (52mmHg to 20mmHg).  Development of reflux symptoms appears to be relatively low (1 in 17).  Unfortunately as this surgery method is new, there is no long term data available [Inoue,2010].  There are also very few medical centers equipped to perform this surgery;  Northwestern Memorial in USA, and Northern Yokohama Hospital in Japan.  Clinical trials are being performed, in multiple countries (including Canada!).

This surgery differs from the Heller Myotomy as the tools enter orally, then a 3cm incision is made in your esophageal lining (mucosa).  From there the esophageal muscle can be cut.  In total 12cm of muscle is cut:  10cm of esophagus, and 2cm of LES [Inoue, 2010].  The incision is then closed with standard endoscopic clips [Zou, 2012]. 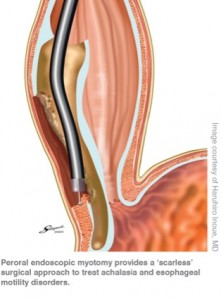 This procedure takes less than two hours, after which you will stay in the hospital for a day for observation.

Complications with this procedure include:  an 8% chance to develop of Gastroesophageal Reflux Disease (GERD), and 6.9% chance for mucosal perforation during surgery. 25% of patients require additional intervention, with the mean followup time of 5.3 years.  [Source with video]

Efficacy of POEM seems to be similar to Larascopic Heller Myotomy  [Hungness, 2012].  Advantages of POEM over LHM is that the length of the myotomy is not limited, and there is no need for fundoplication [Miller, 2011].

Esophagectomy is a surgery in which the esophagus is removed.   The use of esophagectomy is extremely rare in the treatment of Achalasia.  It is a technique more commonly used in esophageal cancer.  The stomach is transplanted into the neck or a piece of colon is sewn where the esophagus would be.  Mortality rates for this surgery are typically 5-10%.  This technique is only used when people have sigmodial esophagus, or have repeated failed myotomies [Glatz, 2007].

Personally I am leaning towards the POEM surgery as it has the fastest recovery time and does not require a fundoplication.  However there isn’t enough long term data to definitively say it is better than a larascopic heller myotomy.  I’m currently looking at enroling in a clinical trial, so that my treatment may take place in a study that may help others in the future.  Plus, isn’t it cool to always have the newest technology?

One thing that I always wonder about is how far away is stem cell technology?  What if I get the surgery but then stem cell technology allow me to regain control of my esophagus?  Could it repair the scars from the surgery as well?  Or would the surgery exempt me from regaining control.  Well I’m guessing we are probably about 30 years away from widespread use, so I might as well take the engineering approach do what you can with the time you are given.