Moving away for a new job is not difficult.  You can logically compare salaries, benefits, stock options, Glassdoor corporate culture reviews, etc… Moving away means moving further from friends and family and may mean some goodbyes.

Prior to moving to Michigan, I had a few friends already in the area.  Jeff was a local Michigander. We had met during one of his many frequent trips up to Toronto; Jeff had fallen in love with the food, festival, and entertainment scene that Toronto had to offer, and made a lot of friends along the way.  Jeff had helped me settle in an really experience things from a born and bred Michigander point of view: American muscle cars, joys of having a boat in your backyard, skating across a lake, firing shotguns at clay pigeons in your backyards, and lots of movie nights in the suburbs.  Since we often went back to Toronto, we spent many 4 hour car rides talking about careers, girls, and a lot about the future of technology.

Cindy was a local, but from just across the border in Windsor.  We had met through mutual friends during my partying years in grad school.  We hung out both this side and in Toronto, making us both partially nomadic.  Since I had moved to Michigan in October, she invited me out for my first Halloween in Windsor with her friends.  I was a witch and she was Jessica Rabbit.  She had also invited me over for my first American thanksgiving in the area at her relatives house.  Thanks for inviting me into the family.

Stephan has been a family friend for as long as I can remember.  We met coincidentally because our mothers were college friends, and our fathers had both worked at IBM.  Stephan has always been super helpful, from helping me unload my massive moving truck, during first move.  He gave me a view into the student life at UWindsor.  UWindsor is an up-and-coming school right now due to the demand for engineers and the Ontario government investment.  We played video games in his dorm with classmates, went out bar hopping in the downtown, First Robotics events, and pit fires in his backyard.

Moving to Michigan was interesting.  I basically had started work, and lived out of my car for a couple of weeks.  I AirBNBed a room nearby for ~$30 a night (before my first paycheck, that was a lot of money), and looked at apartments during lunch, after work, and on weekends.  In the meantime, I stayed with a middle-aged teacher who worked for Detroit Public Schools.  She had a very interesting perspective of Detroit; a lot of the stereotypes about inner city education was true.  It didn’t matter to her.  She was a giver and was passionate about teaching.

My social life in Michigan started out by finding a dance studio.  I spent a lot of time at Troy Dance studio because I had found a place to dance Cuban style salsa (Rueda de Casino).  During grad school, I had been heavily involved in the Waterloo Cuban salsa club.  I wanted to continue dancing, so I found a Cuban salsa class at nearby and put myself out there.  While at the Troy Dance Studio I had found out they had a dance team, and I joined that within the first month.  We went to salsa clubs, and congresses.  It was a lot of fun, but really took up a lot of time.  In the end, I think I burnt myself out and needed to do something else for change.  Dance comes and goes in my life.  It will come again.

To try new things and get outside my network, I was going to a lot of meet-ups.  The first one I went to was a cider and donuts meet-up. Cider and donuts is a very Michigan thing to do in the fall.  People were friendly, but the demographic and age ranges were pretty mixed.  I was looking for people more around my age, and realized that almost everyone around my age ends up at the bar meetups.  On a slow Saturday night, I went to a meetup for the Plymoth Ice Festival.  This was a small ice statue festival in a small town.  During that meetup, I met Sarah, Visanth, Josh and Di.  I hung out with Sarah and Visanth a couple of times after that.

Sarah and I hung out quite a bit.  She was doing her post doc at Wayne State and I ended up meeting a lot of her lab mates.  She invited me on my first and last ice fishing trip.  We also played badminton together at UofM, saw movies, ate food.  She invited me to my first American Superbowl in America (it’s usually at Stephan’s in Canada) at Kevin’s house.  To get to that event, I had to drive 4 hours in a snowstorm.  The funny thing is, I had been out partying the night before and crashed at Visanth’s house.  If I had just checked the address before heading back to mine, I would have realized it was only 10 minute drive to Kevin’s.

I had been on quite a few online dates at that time.  Some more than others.  It’s honestly been somewhat of a spray and pray approach.  Before meeting Ayaka, I had gone on a maximum of 4 repeat dates.  On the first date with Ayaka, I found out that I had met her roommate, Di at the Ice festival.  Apparently she didn’t like me very much and told her to not go on the date with me; Josh disagreed and said that we should meet.  We exchanged a few messaged and decided to meet up at a bar in Royal Oak after work.  It was a good first date; story goes that we talked for so long that we forgot about parking time and both got parking tickets.  She was mad because I only paid for an hour, and she had paid for three, yet we were fined the same amount.  Our second date we went to see a comedy show in Ferndale, where they made a 1 hour improvised rock opera based on the word ‘potato’.  Our third date we went kayaking at Stoney Creek. That was a fun one.  In the end it just didn’t work out.  I’m disappointed in myself more than anything, but perhaps it’s just the wrong time for me.

I met Elmer through Sarah, and decided that I liked the guy even before we met.  Sarah was renting a room from Elmer, and I had stumbled upon his well equipped man cave of magic cards, gaming consoles, multiple gaming computers, anime figurines, and board games.  I figured he was a cool guy.  Elmer had grown up in Michigan and we had a lot of similarities.  One major difference though, is that he is about a foot taller than I am.  We had a lot of fun playing just dance at 3AM in the morning, or messing around with his VR headset.  Through him, I camping in lots of different Michigan and Ohio sites. I met good friends like Pat, Dante, John, Kevin, Kiki, Megan, Katrina …

John moved away a couple months before I did.  He was also one to move before I did, although Cincinnati is only a couple hours drive away.  He had moved for better work opportunities.  I know John for his classic sense of humor, and knowledge of fine whiskeys.  He will do well in Cincinatti, so close to Kentucky and a limitless supply of bourbons.  At his birthday party, I had met one of his coworkers, Yong.  I had finally found another Toisanese person!  I wasn’t alone.  After one conversation with her, she agreed to join our travel group to Taiwan at the end of October.  Yes, I’m that charming.  We bonded over restaurant families and long distance relationships, scary movies and foreign foods.

I met Ian during a camping trip of Elmer’s.  Ian had started working at Elmer’s company after doing the millennial thing and quitting his job in Boston a month after starting.  Ian is a nomad, and being a drifter myself, immediately found common ground.  During our camping trip we bonded during a 4 hour drunken conversation while canoeing.  We also spent a lot of time talking during a 5 hour hike during Ellen and Nick’s wedding. I remember being in Ian’s shoes not too long ago. 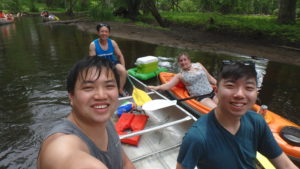 Although I’ve moved away, I’ll still come visit.  Ya’ll are welcome to come visit me too :).